Hats Off For Rural Aid Drought charity, Rural Aid, has been named the charity partner for the 2019 Toyota Country Music Festival, Australia's largest music festival with funds being raised by the traditional festival hat donations and Travis Collins in Concert in Toyota Park

One lucky Australian will also get the chance to win a custom-built LandCruiser 200 Sahara created by Toyota Australia as the major prize in the Raffle for Resilience# launched at the start of Australia's largest music festival.

Toyota Australia chief marketing officer Wayne Gabriel said Toyota Australia has had a long history of supporting rural and regional communities and was keen to assist those people who were doing it tough.

"As the vehicle that's played a part in the lives of so many rural Australians for sixty years, creating a bespoke LandCruiser to support them made perfect sense," Mr Gabriel said.

"With the recent severe drought affecting millions across Australia, support for charities like Rural Aid is more crucial than ever and we are proud to have been able to provide support through the Toyota Country Music Festival.

"The organisation does a fantastic job in providing a variety of support services for rural Australians across the country and we hope that the chance to own this one-off vehicle will encourage people to support this raffle," he said.

Tickets for Raffle of Resilience cost $10 each and can be purchased online at https://www.raffletix.com.au/?ref=wkzrz. The raffle will be drawn on March 8 2019, and the winners presented with their prizes on March 21 2019.

Rural Aid CEO Charles Alder said he was very pleased with the support Toyota had provided as part of the Toyota Country Music Festival and the Raffle for Resilience.

"People in the bush have had it particularly hard over the past few years, and demand for our services continues to increase so it's great that Toyota is such a committed supporter of our cause," Mr Alder said.

"Toyota has always been there for rural and regional Australians, and given the popularity of its LandCruiser models among country folk, this makes for a great prize that we are sure will encourage the broader community to buy tickets.

"All proceeds will be used to help grow the essential mental health services we provide for those in need," he said.

To reflect this, they applied the same white finishes to the new LandCruiser 200 Series in combination with a Vintage Gold paint colour. All the Toyota Genuine Accessories - also designed and engineered in Port Melbourne - including roof racks, a nudge bar and a 3,500kg braked towing kit are also finished in black.

Beyond the visual similarities to the FJ40, the bespoke Sahara features all the advanced technology and luxury appointments found in the top-of-the-range LandCruiser 200 Series.

To ensure the highest levels of safety and security on and off-road, the Sahara is fitted with a full suite of Toyota Safety Sense features, including active cruise control, pre-collision safety system with pedestrian detection and lane departure alert, along with sophisticated multi-terrain select 4WD and kinetic dynamic suspension systems.

In addition to the custom-built LandCruiser 200 Sahara first prize, other prizes provided by Toyota for the Raffle for Resilience add up to a total prize pool of $171,537.70.

The other prizes include a chance to meet cricket legend Glenn McGrath, a trip for two to the 2019 AFL Grand Final, a cricket bat signed by the 2018 Australian cricket team and a football signed by players selected in the All-Australian team. 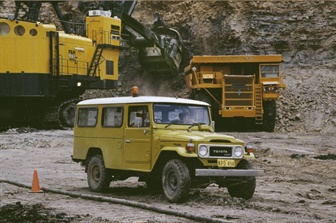 Australia is the largest single market for LandCruiser worldwide, with total sales of all LC200 and its wagon predecessors, LC70 and its forebears and LandCruiser Prado models passing the one million mark earlier this year.

After the first handful of LandCruiser FJ25s arrived in 1958, Sir Leslie Thiess, who took up first the Queensland then NSW distribution for the brand, kickstarted Toyota's success and within six years, there were 4,000 Toyota vehicles in Australia, half of which were LandCruisers.

The original short and long-wheelbase LandCruisers were built in a military style with a canvas hood, a 3.6-litre six-cylinder engine and a single-range four-speed transmission driving the rear wheels. A secondary lever engaged drive to the front wheels when needed.

Subsequent developments included the introduction of a three-speed dual-range transmission and wagon variant before the iconic 3.9-litre FJ40 in both soft-top and hardtop forms arrived in 1965.

By 1969, such was the popularity of LandCruiser that Toyota introduced its first model clearly aimed at a recreational market - the FJ55 Series.

To ensure Toyota still catered to its original core LandCruiser market, it subsequently introduced the four-speed, six-cylinder HJ45 in 1972, the first diesel LandCruiser ute for the Australian market and the forerunner to the still popular 70 Series.

The arrival of the 60 Series wagon in 1981 again heralded Toyota's move to further cater to a recreational market with greater levels of passenger car comfort and features including an automatic transmission option and air conditioning along with a large capacity 4.0-litre diesel engine. In the same year, sales of LandCruiser in Australia topped 100,000 units.

In 1990, the new 80 Series took this concept even further with high levels of luxury while still maintaining LandCruiser's reputation for off-road prowess with a constant four wheel drive system, coil sprung suspension and broad choice of 4.2-litre turbo diesel and diesel powerplants and 4.0-litre and 4.5-litre multi-valve petrol engines.

An all-new model in the form of the mid-sized LandCruiser Prado joined the 80 Series large wagon and heavy-duty 70 Series workhorse range in 1996 offering on-road comfort and convenience and serious off-road capability.

The 100 Series introduced in 1998 paved the way for a new quad-cam V8 petrol engine and five-speed transmission that arrived in 2002 before the current generation 200 Series was introduced in 2007.

As an advanced constant four-wheel-drive large SUV, the current 200 Series model is offered with a choice of 4.5-litre twin turbo V8 diesel or 4.6-litre V8 petrol engines, six-speed automatic transmissions and array of creature comforts and driver assistance technologies to deliver the best performance on and off the road.